Learn what Rodney Davis has to say

Grey Matter is our financial thought leadership for enterprises and business owners. In our interview series, practice lead, Rodney Davis provides valuable insights into issues facing companies and organizations today through his CONVERSATIONS.

Rodney Davis shares his perspective on how companies and organizations can make key financial decisions without compromising company culture and how non-financial leaders can work with finance.

See the Financial Post for a printed version of Rodney’s interview.

In the first of our interview series, Rodney discusses the struggle between financial leaders and company departments like sales and marketing.  He addresses how companies and organizations can make key financial decisions without compromising company culture; how non-financial leaders can work with finance; and when CFOs should stay out of company discussions.

Q:  Financially-based planning and  decision making often seem at odds with the purpose and culture of many organizations. How do you ensure the two are aligned?

Rodney Davis: This concern may come from a technical lead, marketing lead, sales lead, or even operations. We often hear: “We know what’s necessary to achieve the goals of the organization. The finance person just doesn’t understand what we do.” It’s an interesting dilemma I’ve seen play out many times. Good finance people understand what drives the organization. Rather than having to prove yourself, let the data speak for itself. The conversation should only happen once you’ve distilled the key performance indicators (KPIs), or in layman’s terms, the cause and effect. When you take a particular action,  you should always look at the outcome of that action.

Q:  How do you set out goals that non-finance leaders can get behind?
Rodney Davis:

The most important thing that a senior financial leader can do for his organization is to truly understand the cause and effect of the various areas of your business: technical, marketing, sales, and even finance. Find the metrics for success that each department uses and amalgamate them with your financial data, and then have a conversation. For example, the sales team may look at how many leads were generated. And of those leads generated, how many confirmed bookings? Of those bookings, how many converted into sales, and what’s our average sales size? Five or six simple metrics that salespeople can get behind, that are not subject to emotional interpretations or manipulation or changes. They are verifiable and they’re objective.
On the technical side, it might be how many hours of labour go into producing something. What are the costs of the raw materials based on the amount billed by suppliers, and what is the allocation of overhead? Again, they’re objectively determined. You marry the metrics they already use with the financial results, and you’re able to have conversations with these different leaders, speaking objectively about the financial implication of their actions. You then take away any doubt, like “those aren’t my figures” or “I’m not sure those figures are correct.” There’s always going to be some sort of tension with sales, marketing, technical or creative departments because the finance person says they can’t do it or they have to do it  differently, which they think compromises their integrity. But it doesn’t have to, if you speak in these terms.

Q: Are there times when the finance guy should just butt out?

Rodney Davis: I used to be in the telco sector and my VP marketing, my chief marketing officer would send me their ads for approval. I’d say, “I don’t have useful input on colours, font size, or picture selections. Let’s talk about how many impressions it’s going to take to generate a dollar of sales or how long it’s going to be before the marketing dollars translate into revenue.” I would try and make sure that I wasn’t weighing in on items that were outside of my expertise. It’s a mistake that I think a lot of finance executives make, where you have a discussion about technical integrity of something, or get into creative conversations. You have to resist that temptation because it dilutes the effectiveness or the importance of your actual financial message. Which is what a CFO brings to the conversation.

A CONVERSATION On How
Business Can Stay Ahead of
The Competition

Rodney Davis advises companies on staying ahead of the competition, keeping salaries competitive, and understanding why pricing strategies aren’t the only solution. Check it out.

The CONVERSATION – On Staying Ahead of the Competition?

They’re definitely are ways that you can stay ahead of the competition, and again, data, data, data.
There are several ways we’ve approached this, and different scenarios require different approaches. The first entry point for that discussion is understanding what drives profitability for that organization, and in driving profitability for an organization, I always break them down into what drives revenue and what part of the cost structure is fixed versus variable when you get a dollar of revenue. And then understanding how much revenue do I have to drive to cover the fixed component. Understanding the variable component and so when I advise a company, that’s first and foremost is, do I understand their fixed versus variable? Do I understand how much revenue they need to drive to cover their fixed? Now we can have any conversation about cost, in the context of that paradigm and sometimes that labour component is variable, or a portion of that labour component is variable, and sometimes that labour component is entirely fixed, in which case there are other components that drive the variable nature of how their business costs move as a function of how their revenues go up and down.

Why You Shouldn’t Default Prices

A lot of times, operators get lucky. There’s just so very margin rich business, and so they start to convince themselves that they actually are great at pricing and great at margins, and they can just give up margin and get the sale, and the problem is, is depending on the barriers to entry in that marketplace, as competition comes in, first thing that they’re all going to do is chip away at that margin. So, if you don’t have a better strategy other than price, you better hope it’s a high barrier to entry, enter industry because eventually people will go where the easy money is, and price can’t be your only barometer as a system in a sustainable model. It’s just too difficult.

How Do You Keep Salaries Competitive?

The short answer to that is, and it’s one of the most interesting things I tell a lot of organizations, as it relates to their sales teams or other staff components is, there is a responsibility at a particular level or different levels in an organization for understanding the labour as a cost component of how your business makes money, and to me, that is at the manager level and above. So, what do I mean by that? I mean, you know, I have one client who, their business is sales, so they sell services and they have a sales team that operates out of a central sales room and those salespeople have to sell and so, the salespeople want to earn a particular salary, and we’ve been having this discussion for the better part of a year and a half, I think we’ve got it figured out now, but, in their case, it’s management’s job to bring the leads or to bring the opportunities for those salespeople.

The labour component of that, is not the person who’s doing the jobs, responsibility necessarily to make sure that they’re covering their salary. Depending on the level of that person, it’s the persons who are making that labour decision’s job to make sure that they’re paying the right amount to get the right resource into that role.
My experience has been when those superstars are there, who are worth more in the marketplace, sometimes you’re better off to pay them, to keep them because losing them can have a pretty significant knock on effect throughout your organization, but sometimes you’re better off to let them go, if you can’t figure out how to turn that into revenue and your profit for your organization, but you have to put that onus on the people who make the decision.

Why Price Isn’t Everything

One of the most interesting I can remember, was one of my clients was in the retail gas business in a highly competitive marketplace.
I remember going into that industry with a client where the entire marketplace was making decisions and just constantly undercutting each other on price, because they just assume that price was the differentiator.

And we went into that situation with a client who felt that price was the only barometer and we built what we eventually coined as a pricing database, whereby every week there were surveys done, independent surveys done, and we organize this program, implement this program, created this database, where every week there were surveys done of all of the major competitive gas stations representative sample of the market, and interestingly enough, in that case, what we learned fairly quickly was that there were four different pricing quadrants in that market, and what we meant by that was that each of those quadrants had a higher or lower elasticity, in terms of customer sensitivity to price. We also, then went and identified within those quadrants how you best price against the competition, and by putting the customer into that mindset, what we actually ended up with achieving over a two year period was an annual increase in their bottom line of $2 million by changing the pricing conversation from purely price, to understanding which markets had greater elasticity, and therefore you had an ability to price in one particular way and which markets had a greater customer service driver, which had not contemplated previously in that particular marketplace. Customer service did drive some of the customer decision making and it completely changed the way that they looked at their market competition and completely changed the way that they price their business, and then on the other side of that, helped with the cost implications. 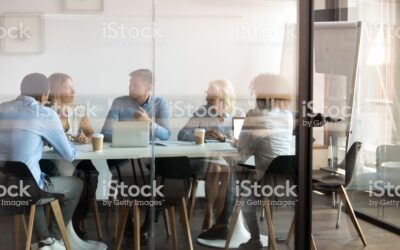